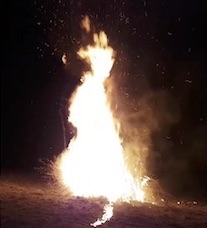 Blame it on 2020 – our attempt to record the General Meeting on December 8th was not successful. Fortunately, we were able to take good written notes, so in this blog post we’ll summarize the fascinating and important presentation by Chris Adlam on what happened in the Almeda fire, and his ideas for improving community fire resilience using native plants. We also have thrown in a few slides from the presentation, and a link to all the slides at the end of the post.

Keep an eye out for the next RNPP blog post, where we will catch you up with the Rogue Native Plant Partnership updates, and our achievements in 2020.

Urban Fire in the Rogue Valley: Are Native Plants the Solution?

Christopher Adlam may be new to the Rogue Valley, but having lived and studied in northern California, he may understand our fire future better than most! Chris recently joined the OSU Extension team as Southwest Oregon’s Regional Fire Specialist, and he holds his PhD in Ecology from UC Davis. He has studied the effects of fire on plant and animal diversity, as well as community fire resilience. So who better to bring in for Rogue Native Plant Partnership’s guest speaker for our late-fall General Meeting?

As he launched his slideshow, Chris wisely noted that this is a difficult subject for many, and we echo the sentiment that it’s not easy to talk about the science behind something that affected this community in such deep and diverse ways. However, we feel it is necessary to take a step back, and use our best methods of analysis to look at what happened. Like detectives, we can trace the path of the fire and see what it tells us about how to protect our communities the next time around. Though many homes and businesses were lost, the Almeda Fire could have been much, much worse. There are no simple explanations as to why the fire spread or failed to spread to certain areas of the valley, but we do know that vegetation – both native and invasive plants – played a role in both.

The Almeda fire started in Ashland on September 8th, 2020, and driven by strong winds, swept into the Bear Creek Greenway, where it burned through riparian zones, grassland, oak savannah and pear orchards before moving on to become an urban fire around Talent. When the fire left the greenway, and we saw houses burning other houses in a chain reaction.

Did the Greenway’s plants and trees, dry after a long, hot summer, cause homes to burn? Chris asks us to back up a minute before answering this question. When people think about the relationship between vegetation and structures, they either fall into the “liability model” camp or the “green solutions” camp. The “liability model” says that the real risk of wildfire is in wildlands, and that plants are setting homes on fire, making plants a liability. Under this model, people move into the wildland urban interface and cut down all the trees around their home in the name of fire safety.

The “green solutions” perspective, on the other hand, embraces the ability of healthy natural areas and vegetation to actually moderate the risk of fire. For example, plants can moderate fires by slowing their spread, slowing down wind speeds, and catching embers that would otherwise end up on someone’s roof.

Structures catch fire in three ways: Radiant heat, direct flame contact and embers. In the case of the Almeda fire, few structures had enough vegetation nearby to generate the amount of radiant heat or direct flame contact necessary to ignite a home. So, we can rule out the first two causes of structure fires in this event, which leaves embers as the sole remaining culprit. In fact, embers are the cause of most home fires that spread from wildlands; they can travel for miles to land on homes, work their way through roofing or siding material, and burn the home from the inside out. After that, radiant heat coming from other homes was the main method of fire spread in the urban Almeda fire.

Were embers generated by vegetation in the Greenway? Absolutely, and we are looking at one plant in particular that burns explosively, sending tall flames and embers into the air: Blackberry.

Almost immediately after the Almeda fire swept through our region, we heard from restoration practitioners about the profound differences in the impacts of fire on restored vs. non-restored areas. In areas that were restored with native plants, with no blackberry surrounding and climbing up the trunks of trees, the fire burned as fire naturally would in a riparian zone: low and slow. It top-burned understory grasses and native shrubs, without frying the soil, and without climbing into the canopy of large established trees. As a result, these trees survived the fire, and understory shrubs are already resprouting with new growth.

In areas that weren’t restored (most of the 300+ acres of the Bear Creek Greenway), where thickets of blackberry formed a thick blanket over the riparian zone, we saw high intensity fire that destroyed all understory vegetation (except for the hardy blackberry roots) and most of the large trees as well.

Yes, Chris agreed, removing blackberry and replacing it with native shrubs will definitely reduce fire risk. But there’s more that native vegetation can do to improve fire resiliency in our community, and it doesn’t need to be limited to the riparian zone.

Trees to the rescue?

Next, the discussion turned to potential strategies for putting native plants to work to improve our community’s fire resilience. Many native plants in our ecoregion are fire-adapted, meaning that they can resprout quickly after a burn, and thrive from the nutrients created by burned dead material. Some plants even need fire to reproduce, while others grow more fire resistant with age. For example, Ponderosa pine trees, though highly flammable when young, are fire-resistant when mature, with thick bark that deflects heat and embers.

One aspect of the behavior of the Almeda fire that we found interesting was the effect of “shelterbelts” of trees that were able to shield homes from fire. Deciduous trees like cottonwoods, or even mature conifers, when planted together, formed a “curtain” of vegetation that may have caught embers and let them fall to the ground, where they can extinguish themselves. This effect has been documented in Australia, where shelterbelts are commonly planted as windbreaks. Looking at images of these landscapes after a fire, homes behind shelterbelts were spared. Chris emphasized that this effect has only been observed anecdotally, but it deserves further study.

Expanding on the shelterbelt concept to shield homes, to shield entire communities from strong winds like we saw the day of the Almeda fire, is another possibility. Traditionally, the hillsides surrounding Ashland up to Medford have been populated by oaks and madrones; could these trees function as valley-wide shelterbelts to slow down windspeeds and capture embers traveling from afar?

After the slideshow, Chris fielded many questions from the audience, but we’d like to circle back to a question about the fears some members of the community have about vegetation in the wake of the fire. Falling back into the “liability model” of structure-vegetation interactions, some (not in this audience, but members of the community at large) are suggesting or considering clearing all trees and shrubs from properties to improve fire resistance.

Says Chris, “Your neighbor’s house has a higher likelihood of burning down your house than your vegetation does.” Yes, he says, if leaves and needles from nearby trees are covering the roof and filling the gutters, that would be a factor in setting a house on fire. But generally, the advice is to keep all vegetation cut back 5’ from homes, and to thin vegetation within 100’ of the home. (Read more about thinning recommendations from the NFPA.) This should be enough to prevent flames from a vegetative fire from spreading to a home. In fact, it’s possible to see situations where the house initially caught fire from an ember, and downwind trees were burned or scorched, but upwind trees suffered no damage. In other words, it’s not the trees lighting the houses on fire, but the other way around. The solution is to construct more fire resilient homes, which is already possible and not more expensive that traditional construction methods.

Some audience questions focused on the actions we can take next to improve fire resilience in our community while promoting the use of native plants in restoration efforts.

To that end, Rogue Native Plant Partnership has formed a working group to develop a native seed mix appropriate for reseeding riparian zones. Although the initial seeding of the Bear Creek Greenway has already taken place, it could be possible to include native grasses and wildflowers in future re-seedings. These species will provide benefits to wildlife while staying green later into the summer, reducing the flammability of these areas.

Meanwhile, we support all efforts to suppress blackberry re-growth until native plants can be established. Agencies and local governments are seeking funding for restoration work, and there’s some talk of a community visioning process to begin next year, to receive public input into how to manage the Greenway going forward. Participation of native plant enthusiasts and restoration practitioners will be vital, to identify and question “liability model” thinking. We don’t need to, nor should we eliminate all vegetation in fire-prone areas, but focus on evidenced-based solutions that work.